Why I Joined the Liederkranz by Clark DuCharme 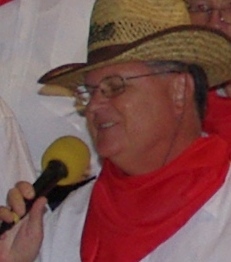 Music, especially singing, has always been a part of my life and something I really enjoy. When I moved to Schlaitdorf from the United States I thought the only singing I would possibly be doing was with a church choir at an American church. Little did I know that I would soon get introduced to members of and in the Liederkranz shortly after arriving in Schlaitdorf.

After moving in, on 5 September 2009, I went to dinner one night at the Flecka Stüble where I met Heiner Krapf.  During our conversation I told him I liked music, especially singing, and he told me about the upcoming Hocketse that the Liederkranz was hosting in a couple of weeks and suggested that I go.

I went to the Hocketse and really had a good time eating the food, drinking the beer, listening to the Liederkranz sing and the Swiss choir sing and play their horns. Because I speak English Henri introduced me to Jurgen Schaffner who told me all about the Liederkranz and at the end of our conversation he asked me if I would like to join. I was overwhelmed that I would be asked as an American to join a German men’s choir. I thought about it and told him I would like to try and that I would begin after the first of the year. The other thing that occurred to me is that in joining the Liederkranz it would give me an opportunity to sing, to meet the people of Schlaitdorf and to be a part of the community.

It worked in that I have been singing with the Liederkranz for 3 ½ years and have gotten to know many people in Schlaitdorf and to be a part of the community.

That’s why I joined and I wouldn’t change a thing!

Powered by WordPress and WordPress Theme created with Artisteer by G. Miller.